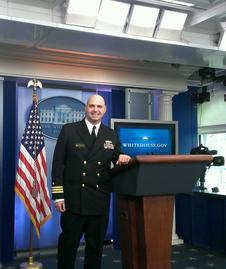 William joined Facebook in November 2018 after serving 22 years in the Navy. His role as Western Region manager for community development brings him to Prineville, Oregon; Los Lunas, New Mexico; and Eagle Mountain, Utah with the goal of building relationships and partnerships in Facebook’s data center communities.

Originally from Amsterdam, NY, Marks graduated from the U.S. Naval Academy in Annapolis, Md. in 1996 and retired from active-duty in 2018 as a commander.

In his final military assignment, Marks was the senior spokesperson for DoD intelligence issues, leading media engagement and special projects for the Vice President and Ambassador Nikki Haley.

Marks was Chief of Media for the U.S. Navy from 2015-2016, directing the Navy’s engagement with national and international journalists, including crisis communications during an international hostage situation, a mass shooting, and roll out of the Navy’s $160 billion budget proposal.

As communications director for the Navy’s Indo-Asia-Pacific Fleet from 2013-2015, Marks led communications for the Navy’s largest numbered fleet, interacting with 35 maritime nations across 124 million square kilometers of the Pacific Ocean. His team at 7th Fleet was awarded the Navy’s Thompson-Ravitz award for best crisis communication plan during the search for missing flight MH370 in 2014, giving 182 on-the-record interviews over the 30-day crisis. It was his sixth time receiving the Navy’s highest award for public affairs.

From 2011-2013 Marks was spokesperson and public affairs officer at the U.S. Naval Academy, leading a department focused on community development, media relations, and social media. In 2012 USNA was awarded the Thompson-Ravitz award for best community relations program.

During his first assignment in the Pentagon in 2004, Marks was named director of Navy community relations, and in 2005 was named lead spokesperson for environmental, medical and legal issues. Additional public affairs assignments include graduate school at San Diego State University, assistant director for people communication, and Executive Officer onboard “Old Ironsides” in Boston, representing the Navy to ambassadors, governors, congressmen and hundreds of thousands of visitors after 9/11. At sea, Marks served aboard USS Gettysburg (CG 64) and USS Spruance (DD 963), USS Abraham Lincoln (CVN 72) and USS Blue Ridge (LCC 19). While on Spruance he was named a U.S. Atlantic Fleet “Shiphandler of the Year.”